How to Have Success with IVF 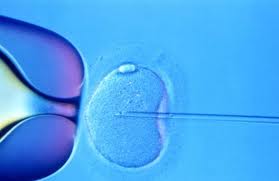 Lately I’ve been seeing a common theme in my private consultations: How does a woman age 40+ who desperately wants a child, but feels an overwhelming sense of hopelessness have a successful outcome with IVF?

Let me tell you about my private fertility client Amy (her name has been changed to protect her privacy).

Amy’s husband isn’t able to ejaculate sperm, so the only way they can have a baby is via IVF.

When Amy and I started working together, she was 40 with a history of 4 unsuccessful IVF’s. Her husband had already gone through two surgeries to extract his sperm and this was the last time he would be able have the procedure.

Because of her age, Amy was also nervous about her egg quality. As a couple, they had decided to use both donor sperm as well as her husband’s sperm, and see which embryos would fertilize. They were also retrieving donor eggs at the same time just in case. In other words, while they really wanted a biological child they were preparing for all the possible outcomes.

I worked with Amy for the 5 weeks leading up to the retrieval of her eggs, fertilization and implantation of the embryos. Every week we worked with her fears and negative beliefs. During our first session, we uncovered a doozy of a belief: “It’s my uterus’ fault. They keep putting babies in me and it keeps spitting them out.” I worked with her subconscious mind to clear that out as well as the fear that 40 year old eggs are too old.

The next week we worked through her fear of having ‘frankinstein’ babies as well as the ethical dilemma she felt around ‘making humans’ in a lab.

Week by week we continued clearing out subconscious blocks like: “my husband’s sperm will ‘crap out’”, “I’ll be a wreck if I’m faced with selective reduction” as well as “I’m not a super star pregnancy woman.”

In between our sessions, Amy did her fertility yoga practice with the Moon Goddess online videos, meditations and visualizations and prepared her mind, body and spirit for implantation and pregnancy.

This is the email she sent me after the transfer:

“We got 3 crappy quality embryos using Rob’s sperm. Of course, he was devastated by this. Two of the embryos were mediocre and one was bad. We got 3 excellent quality embryos from the donor sperm. So although it’s not our first choice, at least there’s good news there”….“We decided to transfer the 3 embryos of Rob’s into me. The doctor warned us that there was quite a low chance of achieving a pregnancy from these, but we wanted to give it a shot anyway.”…”But here’s the good news: we were surprisingly upbeat today. Both of us are sort of putting the whole thing aside, and just getting back to life for the next two weeks. And it feels good … not obsessing over it, not being sad, just keeping busy and making plans to do fun stuff over the next few weeks while we wait.”…”I’m still doing my meditations and visualization, but planning on doing it quietly and once a day (before bed). I want to keep my mind OFF of it all to a certain extent, that feels more relaxed and calm.”

A few weeks later I got this email:

“I have good news to report (yay!) … all seems well with the pregnancy and I am just one day away from reaching the 13 week mark. That 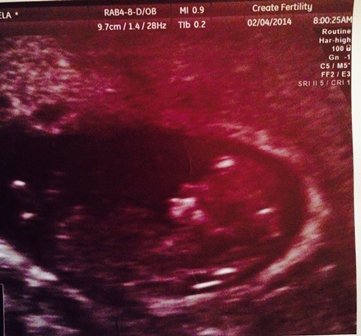 feels HUGE to me, and brings with it some confidence and a bit of relief, such a nice feeling! We’ve told our friends and family now, which also makes it seem so much more real.”

To the right is Amy’s ultrasound at 13.5 weeks. She’s due to have her baby boy in less than two months.

So how did two ‘mediocre’ embryos and one ‘bad’ one which the Doctor believed they shouldn’t even try result in a healthy pregnancy?

I believe it’s because Amy and I worked to create the space in her mind, in her heart and in her body that her miracle was possible – and so it was.

I’m sharing Amy’s story because I believe you too can have your miracle baby.

If you’re preparing for IVF and you know you need healing in order to make your treatment a success, you’ll want to check out my 3 Checklists for IVF Success. The series starts on the outside with detoxing and cleansing your body and environment, but the 3rd and most crucial step takes you inside yourself for the same kind of belief-shifting I worked on with Amy.

==>>Yes! Please send me the 3 checklists for IVF Success

Enter your email to get the first checklist straight to your inbox! + receive regular updates & tips on preparing mind, body & spirit for your miracle.